With the imminent release of the live action remake of Beauty & the Beast, it seems the frenzy surrounding Disney Princesses and their related merchandise has reached a full blown fever pitch. Everywhere you look there are new products inspired by your childhood favorites, from bedazzled Juicy Couture tracksuits and Swarovski-covered clutches, to faux roses entombed in various glass domes.

It seems like anything these days can be princess-ified, which means it was only a matter of time before we started seeing swimwear inspired by the cartoon royalty you grew up loving (and singing along with). The bikinis aren’t official, but you will officially get a ton of compliments from fellow Disney-heads if you’re spotted wearing one of these under, or next to, the sea.

We’ve been celebrating the fact that it’s almost spring by shopping all the hottest jewelry, dresses and runway trends in anticipation of the warmer weather. But now that we just saw the new campaign for Target’s swim collection, all we have is bikini fever.

In a press release Target says the company, “believes every body is a beach body and wants you to love the way you look and feel in flattering and on-trend swimwear styles this season.” And its new models also echo that message of body positivity. 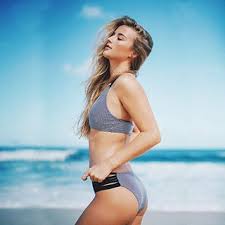 Now that spring break season is upon us and summer is on its way (despite the mixed messages from the current weather situation), it’s not too early to start thinking about swimwear for the holidays and vacations that one might be going on in the coming weeks and months. Recently, a post about swimwear caught my eye, because it wasn’t just regular swimwear; it was a company called Enchanted Bikinis and they create Disney princess-
inspired swimwear, although they say on their website that they are not associated with Disney. Pick your favorite princess, browse their website and you will find a cute bikini with a design based on her signature costume. I was delighted by the adorable bikini top and bottom combinations for Ariel, Snow White, Belle and Rapunzel that I saw first on the list of their products.

Personally, they’re a little too cutesy for my taste, but I can easily see how they could become a popular product. However, their last bikini combo is what really caught my attention. It was a Pocahontas bikini, complete with the fringe and a mock paint tattoo on the arm of the model in the swimsuit. I was surprised and not in a good way. While the ther swimsuits were cute, I feel that the last one was made in poor taste. It trivializes a culture and sexualizes a people, turning ethnic clothing into a sexual accessory and shaming a historical figure who Disney already tampered with enough.

The company’s website explains their aim behind this range of swimsuits, writing, “Our mission is to let the princess in you glow and enchant everyone and everything around, when you wear your Enchanted bikini. We believe that every woman can feel this way without putting on a costume.” And they also promise way more designs to come. Fingers crossed for a spin-off line of swim trunks for all these princesses’ Prince Charmings.