In the 19th century, modesty was the driving trend in female fashion. Clothing was meant to cover the threatening curves of the female form: Necklines were high, hips were hidden, and faces were shaded with wide-brimmed hats and bonnets.

So when beaches became popular destinations for middle- and upper-class families, women were expected to adhere to the cumbersome streetwear styles of the time. The results were a little awkward, if not outright dangerous.

Women refashioned old, long frocks for their beach excursions, sewing weights into the hems of their skirts so they wouldn’t float up as they entered the water. Fabrics were often woolen, which meant they were heavy and, of course, clingy when wet.

Leisurely swimming emerged in the 19th century, when trains and cars democratized coastal beaches. Suddenly, weary urbanites could venture out of their cities and seek a respite at the water’s edge. But dressing for these new aquatic adventures, particularly for women, was anything but liberating.

Train travel and then the automobile enabled people to take trips to the beach. But while men stripped down to their body-hugging swimwear and went right in, women were supposed to cover up their foems, even in the water. Elaborates costumes were designed for beachwear that were barely less than a woman would wear on city streets. That wasn’t good for swimming, or even staying afloat. But some woman pushed the boundaries, and gradually styles changed. See a timeline of photographs of women’s swimwear as it evolved over the last hundred or so years at The Week. 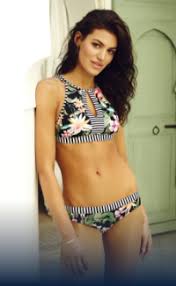 The first swimsuits consisted of bloomers and black stockings. By 1855, drawers were added to prevent the problem of exposure. Women still refrained from swimming too much; the prevailing attitude of the day was that only men should swim. Gradual improvements were being made in the cut of the suit itself. By the end of the 19th century, swimming had become an “art,” as well as an intercollegiate and Olympic sport. In this environment, it finally became acceptable for women to swim. Now women’s bathing suits really had an opportunity to take off. By the 1880’s the “Princess” cut was introduced, consisting of a blouse and trousers in one piece. The skirts were traded in for cotton-like pants. There was also a separate skirt that fell below the knee and button at the waist to conceal the figure. A ruffled cap or a straw hat completed the ensemble.

The new swimsuits relied heavily on the form of the “fashionable” body, gradually exposing more and more skin. The beginning of the twentieth century marked a new daring era in swim wear for women. In 1909, Australian Annette Kellerman was arrested in the United States for wearing a loose, one piece suit that became the generally accepted swimsuit for women by 1910. After that swimsuits began the trend of becoming lighter and briefer. The apron disappeared by 1918, leaving a tunic covering the shorts. Even though matching stockings were still worn, bare legs were exposed from the bottom of the trunks to the top of the shorts. With the Roaring 20’s following WWI, there was a large increase in appreciation of recreation and the spending of leisure time. This was manifested in the first annual “Bathing Suit Day” held on May16, 1916 at Madison Square Garden .